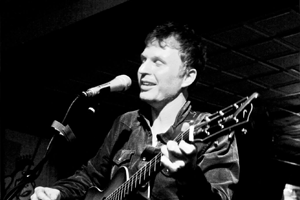 One word you don't hear quite as much outside of Nashville is "songcraft." And when you do it usually predicates those mainstays in the singer/songwriter genre like Prine, Simon, and, depending on the decade, Dylan. But thanks to a movement that any of today's twenty and thirty-something Nashvillians will tell you is alive and well just east of the Cumberland, we are becoming reacquainted with this type of writing--and we like it. Burrows is just one of those newer artists who is helping this musical approach to reemerge among Nashville's indie crowd, along with Americana, Southern Rock, and just plain ol' Country (the kind that drinks PBR, not the kind that wears straw hats).

While it is not uncommon for a Nashville artist to have attended many a seminar on the art of songwriting, a real sense of story is not common enough in local writer's nights. And often when one does find it, it can be just a little too cute--a little hackneyed. In Borrows' music, however, you will find the genre in good form, offering you a narrative, a purpose, and also a melancholy that, while palpable, seems to emanate from a place that you can't quite pinpoint. What you'll also find in his songs is a thoughtfulness and an attention to structure that separates his turn of phrase from the many singer/songwriters who, while they may have the vocal chops, lack the same sense of metaphor; by comparison, these lesser lyricists leave you with the impression that you've heard something of little more substance than a loosely worded journal entry. (Hence the craft.) Apart from the heavy-hitting writers of the nineteen-seventies, you will no doubt be reminded of a few of the prominent artists from the last few decades who have made the effort to return to "roots" music. Of these, the Counting Crows might come to mind. Still, this is a one-man show. The guitar work is thoroughly competent--fluid even. The vocal is plaintiff without being overly emotional, strained just enough to make its case, which is a good sign, since any message worth saying out loud is worth the concern of the one saying it.


You can find his album here:
http://www.meandthemachine.com/matm_019.html

In particular, check out "Just Another Adam," "Camden," and "Alone."