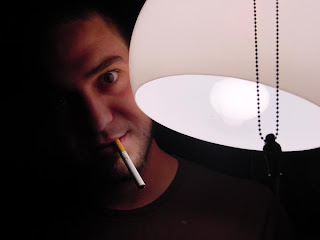 Whenever I try to get people to appreciate "classical" music, I always tell them to approach it the way I learned: follow the melody actively, consciously, trace the contour as it moves along, and if the lines don't seem to resolve when you think they should, hang on a little longer until you're able to make the connection; but above all, chew the phrases. Some music needs a chance to sink in before you decide what you think of it. So it is with Brad's words. In one song he might pull in a half dozen seemingly disparate themes, and despite the actual phonetics having a music of their own--despite making connections of my own--I can't help but often wonder, "What makes this song a cohesive whole?"  "What's tying this together?"

These are both questions I'm happy not to answer. The takeaway is this:  There is always something in Brad's words just beyond what you can readily grasp; there's something intangible about each song, but it's in these in-between spaces that the lyrics really come alive. The "reveal" is always subtle, often obscure, and this lack of concrete message brings with it a sense of longing--something you don't quite get to take with you.  For a minute, you might have it, but you can't quite keep it.  It's good stuff.

Take "Olive" for example.  (I've included it as one of the sample tracks.) You're going to hear romance, self-calumny, Christ, betrayal, and for those of you who doubt the sexual innuendo--even after "suck on me beneath a tree"--I'll ask you this: What is a "sting"? What is "honey"? And who is this Olive anyway?  I think even without nailing down every last question you'll still get something great out of giving this track a serious listen.

But before we get to "Olive," check out these two others (one of them is fairly short).  I'll let them speak for themselves.