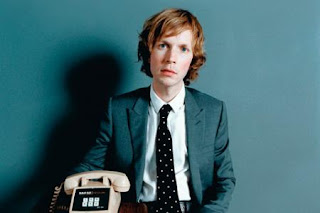 Because he did this in 1998:
"Diamond Bullocks" the hidden track off of Mutations-http://bit.ly/ahuA2r

And because that was from an album which for the most part sounded like this:
"Dead Melodies"-http://bit.ly/19pNvoL

Add to that an extensive and widely varied catalogue which includes a funk record, Midnight Vultures, which satisfies event the most epicurean funk aficionado, and Sea Change, as earnest an offering as any songwriter could really wish to produce.  Originally a hipster, the hipsters for the most part have moved on from Beck.  His detractors accuse him of ceasing to be a trendsetter, becoming a trend follower instead, and of placing a higher price on production than on songrwriting. They deem his R&B antics superficial, and his excursions into folk at best overly abstract, and at worst maudlin. Whatever.

I think we ought to remember just how far ahead of the curve this guy was.  In a time when the airwaves were dominated by grunged-out arena rock, he came along with a beat up acoustic guitar and an 808 and sang "I'm a loser baby."  When anthems to angst were en vogue he penned words with actual metaphors in them.  Self produced from the beginning, he combined sounds we hadn't really heard put together before.  (Note: he has since collaborated with several distinguished producers, including the Dust Brothers, Nigel Godrich, and most recently Danger Mouse.)  Nowadays a lot of what I argue are Beck innovations in the breaking of genre have become standard fare--one of the most notable being the incorporation of electronica into otherwise disparate forms.  He's still good today, but I think it's worth mentioning just where a lot of these mainstream trends got started.  Go back and check the record; I think you'll find Beck there, half coy, half knowing he's got everybody beat.
Posted by A. at 12:21 AM