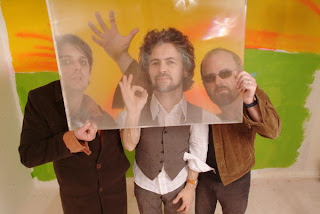 Thanks to the nearly bygone age of continued major label support this band has never gone away.  Had they not been given the time to develop we wouldn't have songs like "Do you Realize"--which is one of those broad and timeless tunes like "A Wonderful World"--and which, as of last year, is also Oklahoma's state song.  But thankfully the Flaming Lips are here to stay.  Here are two tracks (oldies but goodies) that are worth a listen if all you've heard so far from this deep and ambitious band are the one or two songs that made the charts.

"The Spark that Bled"-http://bit.ly/2fWni1
Sometimes listening to the Lips you get the feeling that this whole thing is as new to them as it is to you.  They always seem to be discovering and developing their sound as they go.  As a kind of embodiment of this notion, this song has a roaming, explorative feel to it. Not to mention there's a heck of a groove thrown in there from time to time.

"One More Robot/Sympathy 3000-21"-http://bit.ly/11qEMN
It's always great when a band can tug at your heart strings and make you wanna move your hips at the same time.
Posted by A. at 8:39 PM