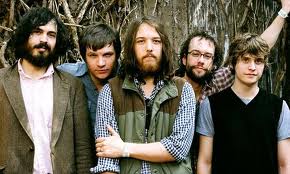 The thing that strikes you most upon first hearing Fleet Foxes' self titled album is hearing that it was released in 2008. It sounds more like a lost Moody Blues record circa 1978, except earthier and perhaps less ornate.  There are tons of harmonies (think Crosby, Stills, Nash) and the occasional verbed-out guitar that almost reminds you of an Ennio Morricone track.  Probably the best way to meet this band is through the link below.  Despite capturing their sound, which is somehow both stoic and soulful at the same time, it also showcases the their other anachronistic quality, the ability to do it live.  The thing about Fleet Foxes is this, it's never pretentious or polished, it's just good music.