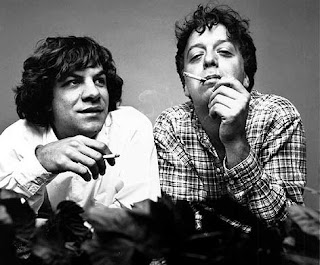 Of all the bands I listen to Ween is easily the hardest to talk about. They are one of those bands you just have to "get," and it's a task that many folks simply aren't up to. Made up of two guys who operate under the pseudonyms "Dean and Gene Ween," we are talking about a band that started out recording unbelievably raunchy albums on a four track and playing shows with just the two of them and a DAT machine to signing with Elektra and releasing a series of albums where they deliberately defied any specific genera by dint of their ability to completely master all of them. But they never reach the point where imitation is mere kitsch, however; somehow they always "mean it" in their own way, and, knowingly or not, seem to thread their chameleonlike oeuvre with an element that is distinctly, well, Ween. It's weird.

There simply is no pinning these guys down.  Those who don't take to Ween perhaps find their amorphism to be too much without center. But for the die hard fans, which seem to be the only kind, it is the spontaneity and the playfulness which makes up a huge part of the appeal. Gene's infinitely versatile vocals pair perfectly with the band's musical sensibility, which crosses back and forth over the line between being satirical and completely sincere. There is indeed a lot of irony in their music, and a lot of humor too. Just when you think they are hitting on something really profound, there is always the chance that they're making fun of you. But, the fact is, the raucous humor just makes the sweet songs sweeter, simply because you know that it all comes from the same source.

It is almost impossible to decide which songs to post here since more than any band, Ween seems to need a hermeneutic approach which almost requires listening to the whole catalogue. But what the hey. Here are four tunes and two jingles.

"Help Me Scrape the Mucus Off My Brain"-http://bit.ly/aUdrLz
Just when it looked like Ween might be about to carve out a comfortable place among the mainstream alternative bands they released a country album.  Here is one of the many gems from that record.

"Where'd the Cheese Go"-http://bit.ly/OItZ
Written after they were commissioned by Pizza Hut to write a jingle for their new "stuffed crust" pizza.