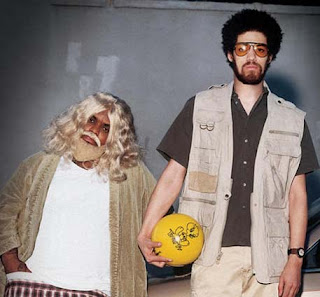 To write this band off as just another top 40 phenomenon would be a gross oversite. And while their second record wasn't as big a success as their first, I think it is, arguably, better once you realize that this is soul, not pop, and come to view them as the heir apparent to people like Ottis Redding and Al Green. That said, Gnarls Barkley seems to be as much post-genre (if that can be a word now) as they are pop, soul, hip-hop, electronica, or any other label we would hoist on them. We've all heard "Crazy," and while I maintain that it is one of the most important, and not to mention harrowing songs to hit the mainstream--it does seem to have a haunted quality that comes from some unknown and remote place: the difference between these two tracks below is why I love this band so much.

Each member of this group has a really productive solo career.  Danger Mouse, of course, has an instantly recognizable production style and works with a constantly varying, super-talented group of musicians. But I'm keeping my eye on Cee Lo Green. The fact is, he's a phenomenal singer with a unique voice, and his lyrics, once examined, turn out to be some of the most painfully heartfelt and honest stuff out there.  Not many folks are deep enough to sing you a hurtin' song with a smile on their face. So I think it's worth hearing just one of his solo tracks too.  This one lends support to my theory that all songs with the word "Georgia" in the title are automatically great.